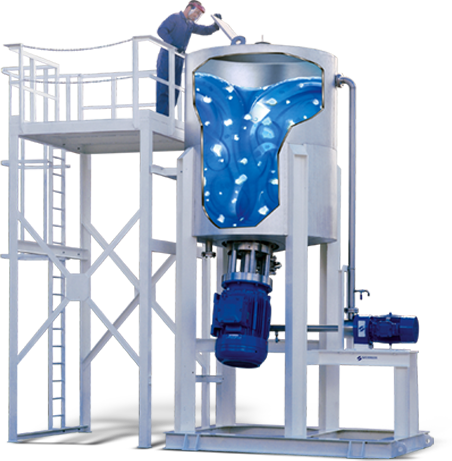 If you thought it couldn’t be done, think again. Silverson’s mighty Disintegrator 2500 mixing system will disintegrate, solubilise or disperse the largest of solids - up to 1 metre across - in a single operation, and in times you wouldn’t believe.

The Disintegrator 2500 incorporates a powerful and unique Silverson mixer located in the bottom of a custom-built vessel. The mixer exerts a massive suction downwards from the surface of the liquid, pulling down even the most buoyant of solids, no matter what the size. These solids are literally ripped apart and dispersed throughout the mix, and with the refinement of a Silverson In-Line mixer included in the system, are totally solubilised or suspended.

For smaller solids, Silverson offers the Duplex Disintegrator/ Dissolver, which was specifically developed for the disintegration and solubilisation of solid rubbers and polymers for the lube oil and adhesive industries. 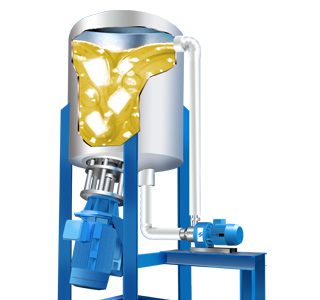 The unit is charged with liquid and started. Large solids are fed into the vessel and drawn down to the workhead which will rapidly shear lumps and slices off the edges and corners. These will be drawn into the interior of the workhead, driven by centrifugal force to the periphery and further sheared by the rotor tips against the edges of the stator perforations as they are expelled radially from the head. 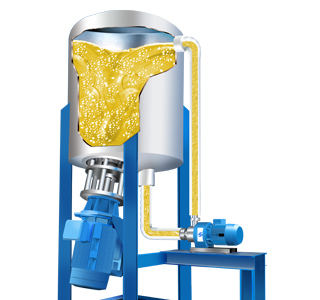 Once the solids are reduced to granular size the self-pumping In-Line mixer is started. The product is drawn from the bottom of the vessel, processed through the In-Line mixer’s high shear rotor/stator workhead and passed back into the top of the vessel ensuring complete solution or suspension.

No need for pregrinding, slicing or cutting of large solids. The Disintegrator 2500 can take odd shapes and the largest size polymer bales commercially produced. Capacity is from 1,000 to 100,000 litres.

The Duplex was specifically developed for the disintegration and solubilisation of solid rubbers and polymers for the Luboil and adhesive industries, but its success has now seen its introduction into all fields of mixing.

A small scale version of the D2500, the Pilot Disintegrator Plant has a standard capacity of 250 litres. Silverson can custom build systems to meet clients’ specific requirements.

Silverson has developed a system for high speed reclamation of waste confectionery and other materials. The principle has been developed from Silverson’s large scale D2500 Disintegrator/Dissolver units in response to a number of specific requests for a smaller scale reclaim plant.

The reclaim plant will rapidly disintegrate and solubilise a variety of waste material without the need for pregrinding or chopping.

Have the latest how-to videos, application reports and more delivered straight to your inbox.